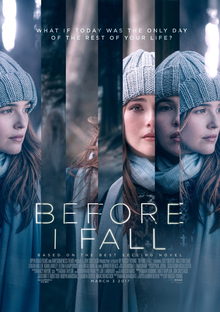 This movie is about a girl who dies. Her name is Samantha and she is still at highschool, so she is 17 years old. On the day of her death she wakes up like on every other day, too. It is Friday and “Cupid’s Day”, and she is excited about her plan to spend her first night with her boyfriend Rob. In the morning she is rude and not polite to her little sister and her parents like lots of teenagers, she doesn’t have anything for breakfast, and walks out of the house as fast as she can like every morning. Outside, her best friend Lindsay is waiting for her to pick her up for school.
During the history lesson, the people who distribute roses for Cupid’s Day come in and give her one rose from her boyfriend and another one from a guy she has known since elementary school. But this guy called Kent isn’t popular and – unlike her – has no friends. Samantha and her three friends are the most popular girls at school. After the lesson Kent invites her to a party at his house in the evening. At about ten o’clock Samantha and her friends arrive at the party. Everything is perfect, everyone is dancing and drinking until a girl walks in. She is not popular and gets bullied by Samantha or rather her best friends and the whole school. She has no friends and people call her weird, strange or even a psycho. This girl called Juliet walks straight up to Lindsay and Samantha and calls them nasty things and tells her opinion about them and their attitude. Then all of the people start to spill their drinks over Juliet until she runs out. After that, Samantha and her three best friends decide to go home and get into a car accident in which they apparently die.
The next morning Sam wakes up in her bed and thinks everything was a nightmare, but then her sister comes in and says she needs to get up for school. Her cellphone says the same: It isn’t Saturday, it is Friday again. The complete day repeats, and Samantha tries several things like not going to the party or warning her friend in the car to pay more attention to avoid the deadly car accident. But nothing changes. She is forced to repeat the day until she does everything right and is ready to die.
After understanding that, Samantha wakes up and is nice and kind to her parents and her sister and tells them that she loves them. At school she is kind to everyone and asks her friends why they all have a problem with Juliet. They are confused and when one of them says: “Yesterday you were afraid of her biting you!?“ Sam answers:“Oh, that was a long time ago… It was yesterday.“ At the party she breaks up with her popular boyfriend Rob who isn’t the right guy for Sam because he is just superficial. She goes into Kent’s room and sees a piece of paper on the wall on which is written: “Become who you are!“ Then she says that she is sorry for everything she and her friends did to him and that she has ignored him although he had loved her since they were children, and then she kisses him. Juliet arrives at the party and is spilled with drinks, runs out again through a forest and Sam follows her until they are next to a road. Sam tries to talk to Juliet and to say sorry but Juliet says it is too late. She runs right in front of a truck and Sam runs after her, pushes her away so that Juliet reaches the other side of the street. And then Sam doesn’t see the truck anymore. She doesn’t have any pain, she’s just happy and sees all the important moments of her life. Juliet runs to Sam who is lying dead on the road and screams: “But you saved me Sam, you can`t die!“ But Sam answers quietly in her head: “NO. You saved me.“
I would highly recommend this movie because it conveys an important message. We often forget how valuable every single day in our lives is; we live just from one day to the next and do not think that life can end at any second. The movie also teaches us that every day could be our last one, so we should try to become a good person, to open our eyes and to see which things and which persons are really important. The actors convey those messages really well and I can only say that this is a great movie.